An Unorganized Mind/Musings and Memories with Photos *To view the complete Menu: Click on menu then use the down arrow to scroll down the Menu Categories.

Poetry affords us a respite in which we may gather renewed strength for the old struggle to adapt ourselves to reality. Robert H. Schauffler

Look for something by category.

Follow An Unorganized Mind/Musings and Memories with Photos *To view the complete Menu: Click on menu then use the down arrow to scroll down the Menu Categories. on WordPress.com

This is a true, short story:

Years ago, when my kids were all young, living in Panaca, NV; we were building a new house on a lot we had recently purchased in the middle of town.

We bought a very small 8 X 40′ trailer we hauled to the building site and lived in that while we were building.  With a family of five children crammed within, we were literally living on top of one another, like sardines in a can.  We did build an additional bedroom onto the trailer for the kids to sleep in.  We pretty much threw it up just to suffice our short stint till the new house was finished.  In the winter, ice formed on the inside around the door and window.  Sounds pretty dismal but looking over at the beautiful, new home going up made it all very bearable.

Everyone pitched in and helped on the building project, by the way.  I have photos of even my two sons up on the steep pitched roof helping their dad shingle it.  My ex-husband had a saying, “Small houses build character.”  That must be true because each of the kids coming out of this union are solid adults, true and capable. This is a great story in and of itself but today I am narrowing this broad story down to a particular moment in time, focusing on an incident that happened in this tiny trailer and with one son in particular, Ryan, our eldest at nine years old.

I was fixing dinner, the  house was in a shambles (as usual) and hot in the middle of summer with the screen door to keep the flies out and help the air circulate.  I was fixing supper over the small stove in the cramped kitchen area.  Ryan came through the screen door and I instantly began scolding him for not hurrying up and shutting the door behind him as he was letting the flies in.

Busy with fixing a meal, I didn’t notice his hands were clasped behind his back.  After he came inside and I quit scolding him, he pulled what he had been concealing behind his back, a huge bouquet of wild, yellow roses that grew profusely in the area.  I was so taken aback at this surprise he offered me and feeling very guilty for getting after him.

As I stood there, in the middle of dinner preparations, feeling very sorry for being so hasty to chastise him for “dawdling”, he went on to tell me in a meek little voice that he had picked all the thorns off of the roses.  What a mixture of emotions were swimming around in my head and heart.  Mostly, an overpowering feeling of love and gratefulness for this precious little boy along with feelings of anger at myself for ruining his big surprise.

This is one of those bittersweet memories, a mother stores her whole life in her memory bank, pulling it up either at will or having it flash across the screen at random times.  My “boy” is now 39 years old.  Rather shy and sensitive by nature still.  Having been through the “Hard Knocks of Life University” himself by now and much too old for me to take upon my lap and cuddle and assure him all is right in the world with a kiss and a hug.  How I miss those simple times, those easy fixes.

I hope I did something, somewhere along the road of parenting, that he can pull from his memory bank, to set him back on course when he feels life weighing down upon, a childhood memory to help get him through the hard spots.  He has grown into a good person, a responsible adult who holds down a steady job and his word is his bond. But, oh, how I love and miss that little boy of long ago, standing at my doorway with a beautiful bouquet of yellow, thornless, wild roses for his mother.

This is a story about love.  The purest kind.  When we give everything we have to give.  One of the greatest gifts Ryan gave me that day was to overlook my brash first reaction and wait patiently for me to calm down then pull his surprise out and offer it in his sweet, childish way, even explaining he had picked all the thorns off first.  I’d say, this is one of my most treasured gifts. 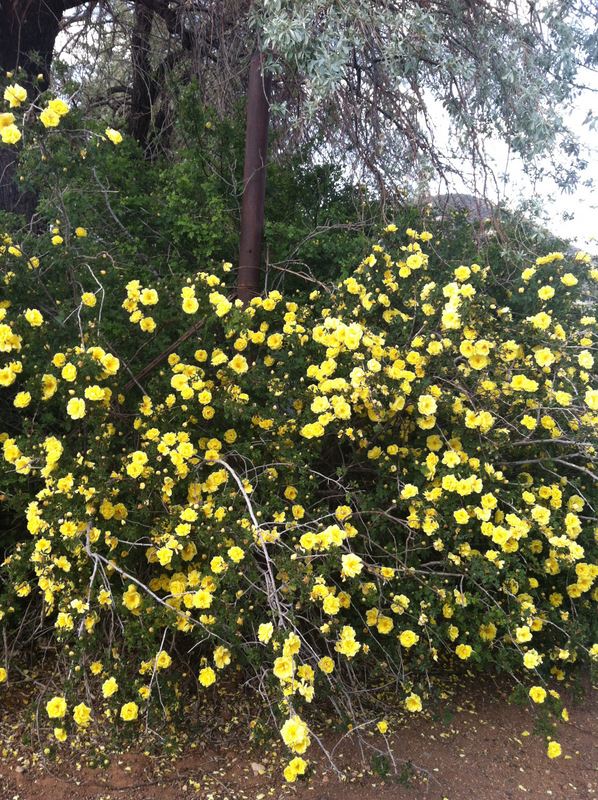 Quote by Tasha Tudor from the book ” The Private World of Tasha Tudor” :

” When I’m working in the barn or house I often think of all the errors I’ve made in my life.  But then I quickly put that behind me and think of water lilies.  They will always eradicate unpleasant thoughts.  Or goslings are equally comforting in their own way.”     “…..Oh, it’s very soothing.”